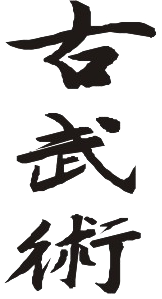 Okinawan Kobu jutsu or kobudo is a Japanese term that can be translated as "old martial way of Okinawa". It generally refers to the classical weapon traditions of Okinawan martial arts, most notably the bo (six foot staff), sai (short unsharpened dagger), tonfa (handled club), kama (sickle), nunchaku (nunchucks) and jo (short staff). In addition the Japanese sword is also used as this was the main weapon that the Okinawan people were training to defend against.

It is a popular story and common belief that Okinawan farming tools evolved into weapons due to restrictions placed upon the peasants that meant they could not carry arms. As a result, it is said, they were defenseless and developed a fighting system around their traditional farming implements.
Kobudo traditions were shaped by indigenous Okinawan techniques that arose within the Aji, or noble class, and by imported methods from China, Indonesia, Malaysia, Thailand and the other countries that traded with Okinawa.

Kobudo arts are thought by some to be the forerunner of karate, and several styles of that art include some degree of kobudo training as part of their curriculum. Similarly, it is not uncommon to see an occasional kick or other empty-hand technique in a kobudo kata. The techniques of the two arts are closely related in some styles, evidenced by the empty-hand and weapon variants of certain kata. Kobudo and Kobujutsu are older and have undergone less "modern development" than Karate and still retain much more of the original elements, reflections of which can be seen in more modern karate kata.

Kobu jutsu uses a syllabus that incorporates the use of all the traditional Okinawan weapons, many of the techniques used in kobu jutsu are reminiscent of karate and ju jitsu techniques.

The bo is a six-foot staff, sometimes tapered at either end. It was perhaps developed from a farming tool called a tenbin: a stick placed across the shoulders with baskets or sacks hanging from either end. The bo was also possibly used as the handle to a rake or a shovel. The bo, along with shorter variations such as the jo could also have been developed from walking sticks used by travelers, especially monks. The bo is considered the 'king' of the Okinawa weapons, as all others exploit its weaknesses in fighting it, whereas when it is fighting them it is using its strengths against them. The bo is the earliest of all Okinawa weapons (and effectively one of the earliest of all weapons in the form of a basic staff), and is traditionally made from red or white oak.

The sai is sometimes mistakenly believed to be a variation on a tool used to create furrows in the ground, however this is highly unlikely as metal on Okinawa was in short supply at this time and a stick would have served this purpose more satisfactorily for a poor commoner, or Heimin. The sai appears similar to a short sword, but is not bladed and the end is traditionally blunt. Records from China prove its original existence although in a much more elongated form where it was known as Tsai and was used purely as a weapon. The weapon is metal and of the truncheon class with its length dependent upon the forearm of the user. The two shorter prongs on either side of the main shaft are used for trapping (and sometimes breaking) other weapons such as a sword or bo. The sai originally reached Japan in the form of the jitte or jutte, which has only a single prong. Both are truncheon-like weapons, used for striking and bludgeoning. Sai were thought to be given to those in Okinawan society that the Japanese could trust to maintain order. Sai are traditionally carried in threes, two are used in combat and the third is used as either a precursor to the actual fight and is thrown at the enemy, or as a spare in the event that one is knocked from the hand. There are many other variations on the sai with varying prongs for trapping and blocking, and the monouchi, or shaft, can be round or octagonal. Sai were also used as handcuffs and were a symbol of authority in Okinawa. A form known as manji sai has the two shorter prongs pointed in opposite directions, with another monouchi instead of a grip. Two sai are called zai.

The tonfa is more readily recognized by its modern development in the form of the police nightstick, although its usage differs. It supposedly originated as the handle of a millstone used for grinding grain. The tonfa is traditionally made from red oak, and can be gripped by the short perpendicular handle or by the longer main shaft. As with all Okinawan weapons, many of the forms are reflective of "empty hand" techniques.

A nunchaku is two sections of wood (or metal in modern incarnations) connected by a cord or chain. There is much controversy over its origins: some say it was originally a Chinese weapon, others say it evolved from a threshing flail, while one theory purports that it was developed from a horse's bit. Chinese nunchaku tend to be rounded, whereas Japanese are octagonal, and they were originally linked by horse hair. There are many variations on the nunchaku, ranging from the three sectional staff, to smaller multi-section nunchaku. The nunchaku was popularized by Bruce Lee in a number of films, made in both Hollywood and Hong Kong. Now it is also made with chains or rope in between.

The kama is the traditional farming sickle, and considered one of the hardest to learn due to the inherent danger in practicing with such a weapon. The point at which the blade and handle join in the "weapon" model normally has a nook with which a bo can be trapped, although this joint proved to be a weak point in the design, and modern day examples tend to have a shorter handle with a blade that begins following the line of the handle and then bends, though to a lesser degree; this form of the kama is known as the natagama. The edge of a traditional rice sickle, such as one would purchase from a Japanese hardware store, continues to the handle without a notch, as this is unneeded for its intended use.

Jo Jutsu is a Japanese martial art using short staffs called jo. The art is similar to bo jutsu, and is strongly focused upon defence against the Japanese sword. The jo is a short staff, usually about 3 to 5 feet (0.9 to 1.5 m) long, about the average length of a walking stick.

Iai jutsu is the Okinawan style of using the Japanese sword, there are similarities to some of the techniques used in iaido or kendo which are the two modern martial arts derived from the samurai fighting arts of Japan but has its own unique elements.